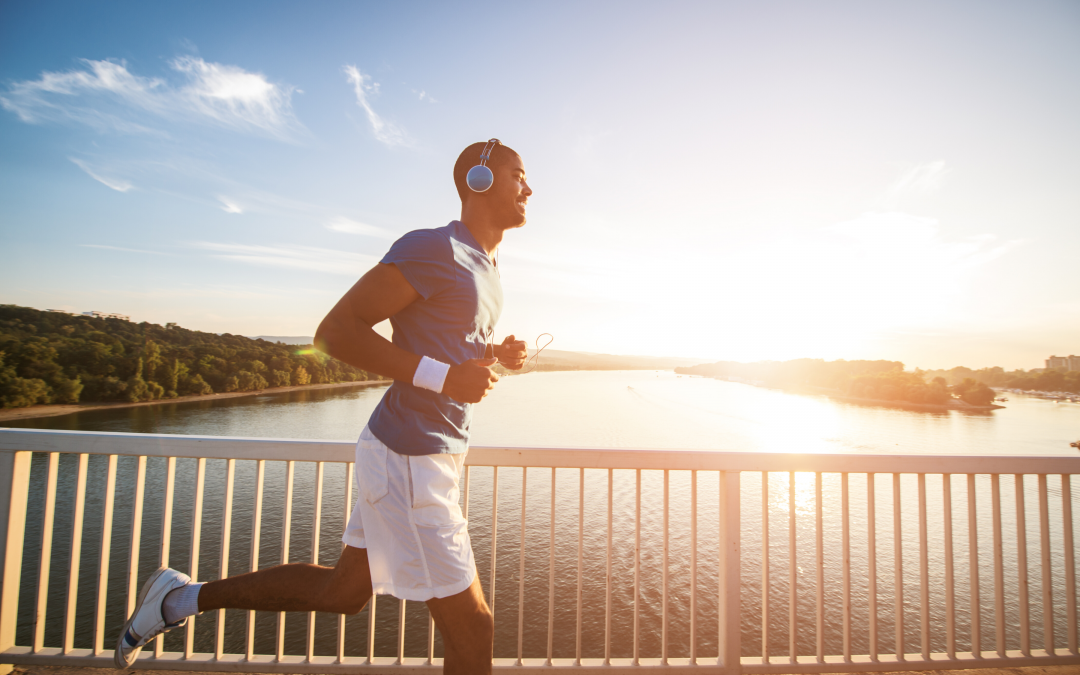 “Let me ask you something.  Are you crazy?”  This was the question I was asked from a smiling neighbor who had seen my post about dodging lightning storms during an early morning 20-mile training run.   Before I could get out a response, my wife chimed in with “Yes…Yes he is.”

If you have been running for any reasonable amount of time, you probably understand how quickly a conversation can change when someone finds out I run 100-mile races.  It usually results in an explosion of questions or being stared at like I have 2 heads.  I get a kick out of both.  For most people, including new and even experienced runners, the idea of covering that distance simply seems impossible.  I used to be one of those people.

Over the last handful of years, I have come across some foundational pillars that have had immense positive impact on my ability to run longer while expending less energy.  While I find that some of my most valuable tools come into play when I am not actually laced up, my goal here is to provide insights that you can begin to incorporate into your next run, should you so choose.  Whether you are working up to ultra-distances or you simply want to improve your running endurance, I want to share two specific strategies with the hopes that you will benefit from them as much as I have.

But I will warn you…they take patience.  I have been around enough runners to understand that as a collective group, patience doesn’t tend to fall on our list of most prominent strengths.  We want results, and we want them now!  Cue the pending injury…  These take some time, but the payoff may be just the key you need to unlock your max endurance potential.  Or they could just be the ramblings of a nut-job who enjoys hitting the trails.  I guess time will tell. 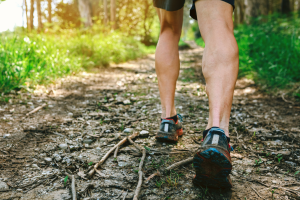 So…let’s talk cadence!  Cadence is a buzzword around the running community and will be part of any coach’s vocabulary, which can make it somewhat intimidating.  But simply put, cadence is the measure of your stride turnover rate in steps per minute (SPM).  In other words, a runner with a cadence of 165 SPM is making impact with the ground 165 times over the span of 1 minute.  Simple enough, right?

But why do we care?  Well…because injuries suck.  It is well understood that running form can make or break a runner.  Poor form can potentially lead to serious injury stemming from additional stress on joints or connective tissue.  And while there are countless little tweaks that can be made during the crusade for the perfect form, I firmly believe that finding the sweet spot in your cadence range will correct most errors on its own.  So much so that when my Dad asked me what mechanics I pay attention to during my runs, my immediate, unfiltered response was “I monitor my cadence.  Because if my cadence is 180 or higher, it is really hard to run wrong.”

This is an idea that I developed over time.  I began to recognize that when I felt fatigued, I would exhibit symptoms such as running with my head down, hips back, shoulders slumped forward, etc.  In other words, my form was crap.  I also recognized that when I found myself in this state, my cadence had consistently slowed from my target of 180 down to 175 or lower.  As soon as I fixed the issues and straightened up my form, my cadence quickly picked back up.  Intuitively, this told me that if I monitored my cadence, I could protect my form.  And if I could protect my form, it meant more efficient running…BINGO!  It has also led to lighter, quicker steps (which mitigates over-striding) and improved recovery due to less impact on the body.

After watching me run, my Dad decided to make the change in his own training and although it took some time to get used to, he quickly noted the improvement in recovery when running at 180 SPM.  I am proud to say, at least in this instance, that the student has finally become the teacher.

One problem with cadence, however, is that it can be hard to pinpoint exactly what the ideal turnover should be.  While 180 works well for me, the perfect cadence will vary from person to person.  Based on everything I have read, a healthy range will probably land somewhere between 170 and 190.  This is echoed in a great article by McMillan Running with an emphasis that most runners with a cadence below 170 would probably be well served by gradually increasing their cadence over time.

So, if you find yourself in a lower cadence zone, or suspect you are over-striding, consider setting a target of 5 to 8 steps per minute higher than your current cadence (i.e. if your current cadence is 160 SPM, try targeting 165 to 168 SPM) and begin incorporating into your running.  Keep in mind that any change to your gait is going to feel uncomfortable so don’t be put off if it initially seems unnatural.  Soon enough, it will become your new normal and you can decide if it makes sense to continue to increase further.  And once you have your cadence dialed in to what works best for you, you can build a stronger link between your turnover rate and your breathing, which brings me to my next topic… 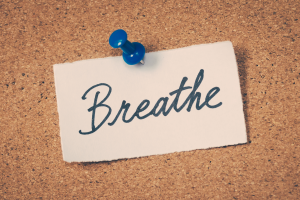 It’s time to talk breathing! This is probably the point where you roll your eyes and wonder what I could possibly teach you about breathing.  I mean, you have literally been practicing since the moment you were born!  But…the fact is that many of us don’t breathe effectively.  Especially when we run.  Although I primarily want to share how I use my breath to “change gears” during training and races, I believe it is imperative to hit on a few breathing fundaments first so that we are on the same page.

Breathe from your belly:   If you are sucking wind with rapid, shallow breathing during your runs, you are missing the mark.  Learning to breathe from the diaphragm is critical to postponing fatigue and maximizing endurance.  You can check out this post for some great exercises to learn how to better breathe from your belly.  My personal go-to for practicing full, deep breathing during my runs came from using an altitude training mask.  The air restriction not only forced proper breathing but also better developed the muscles used when incorporating the diaphragm.  And it’s fun to scare the bejesus out of other runners early in the morning.  If you opt to try the training mask, you may need to start while walking but the payoff is well worth the effort.  If you would rather forego the mask, try breathing only through your nose for portions of your run.  Like the mask, it will reduce the amount of air you can move resulting in the need for fuller, deeper breaths.  Just watch out for snot rockets.

A full exhale will result in a deep inhale:  You may instinctively assume that a full breath begins with the inhale, but I have found that it is much more important that I focus on my exhale cycles when running.  Give this a try…take a second to forcefully expel all the air from your lungs and you will notice that as soon as you reduce the pressure to blow air out, they automatically inflate again with little effort. Cool right?!  So rather than trying to pull air in and risk a shallow exhale, use your breathing patterns to emphasize the exhale and regulate your oxygen delivery more effectively.  Don’t get me wrong…the inhale is where the magic happens but without a full exhale, you will never be able to maximize the available oxygen in your lungs.

Tie your breathing to your steps:  In order to better focus on your exhale, plan on emptying your lungs for one additional step as compared to your inhale.  For example, try exhaling for 3 steps and inhaling for 2.  I call this the 3-2 pattern.  In addition to assisting with a full exhale, using an odd step cycle like this also ensures that your breathing pattern alternates from side to side.  I have not seen science to support that your gait can be negatively impacted by always initiating the breathing pattern on the same foot, but a great runner once told me that it did, and I decided to take his word for it.

Don’t be frustrated if you initially begin to feel out of breath.  If it becomes too much, drop back to your default breathing pattern for a few minutes and then give it another shot.  It may feel awkward at first but before long it will become second nature.  The key will be figuring out what pattern works best for you.  For example, I now use a 5-4 pattern (5 step exhale to 4 step inhale) during most of my easy runs.  I have built up to it over time and it really helps regulate my breath while giving me accurate feedback about my intensity level.

Use Your Breath Patterns as Gears:  This is where it gets cool!  When I first started running, it was all “balls to the wall” and I sounded like a steam engine barreling down the track.  I typically pushed it up and a 2-2 pattern was all I could fit in.  I just didn’t know any better.  The problem is that there is nowhere to go from there.  I had no more oxygen to throw on the fire.  And if I wanted to slow down, it took me forever to get everything under control because my lungs were maxed out.  So much for recovering on the move!

As mentioned above, I now use a 5-4 pattern for my easy runs.  Over time, however, I also developed the 3-2 and 4-3 patterns.  Today, these serve me well.  I can instantly “down-shift” in order to pick up speed, tackle a hill or challenging trail, or deal with excessive heat as my heart rate rises.  This has been an ENORMOUS tool in my training and racing and I can’t overemphasize how important I think it is, especially because it seems to be easily overlooked.  Having these gears accessible is also critical to learning how to recover while running after a period of intense activity.  That ability alone will separate you from most runners if that is an interest of yours.

Whether you have studied cadence and breathing extensively, or this is the first time really putting some thought into how you can use these tools to your advantage, I am hopeful that you found something useful here.  I would love to hear about your own experiences around these topics as well as others that you view as foundational to your running success!